Myopia rise and vision health issues left in its wake 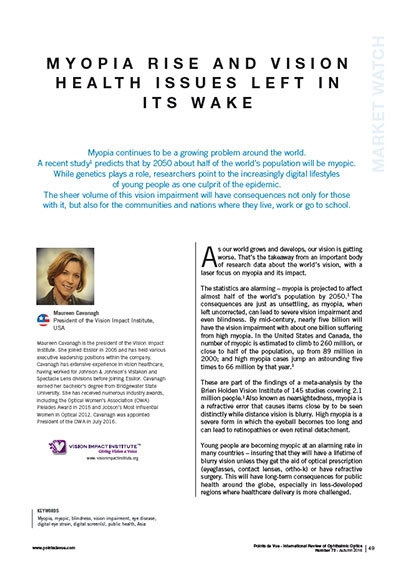 Myopia continues to be a growing problem around the world. A recent study predicts that by 2050 about half of the world’s population will be myopic.
While genetics plays a role, researchers point to the increasingly digital lifestyles of young people as one culprit of the epidemic.
The sheer volume of this vision impairment will have consequences not only for those with it, but also for the communities and nations where they live, work or go to school.

As our world grows and develops, our vision is getting worse. That’s the takeaway from an important body of research data about the world’s vision, with a laser focus on myopia and its impact.

The statistics are alarming – myopia is projected to affect almost half of the world’s population by 2050. The consequences are just as unsettling, as myopia, when left uncorrected, can lead to severe vision impairment and even blindness. By mid-century, nearly five billion will have the vision impairment with about one billion suffering from high myopia. In the United States and Canada, the number of myopic is estimated to climb to 260 million, or close to half of the population, up from 89 million in 2000; and high myopia cases jump an astounding five times to 66 million by that year.

These are part of the findings of a meta-analysis by the Brien Holden Vision Institute of 145 studies covering 2.1 million people. Also known as nearsightedness, myopia is a refractive error that causes items close by to be seen distinctly while distance vision is blurry. High myopia is a severe form in which the eyeball becomes too long and can lead to retinopathies or even retinal detachment.